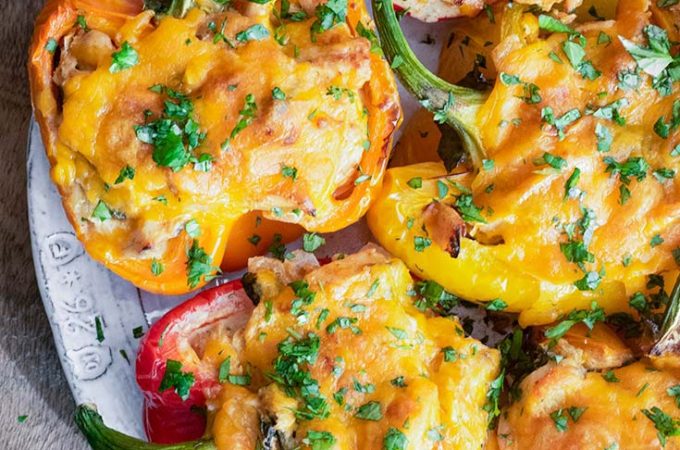 Oh dear, these chicken stuffed peppers are gooooooood. So good, I almost couldn’t write this article because I was too busy enjoying every last nibble. So good, we didn’t have leftovers. So good, I’m making it tomorrow for dinner, again. So good, my picky-eating-friends cleared their plates. Get the picture? If you’re ready to make 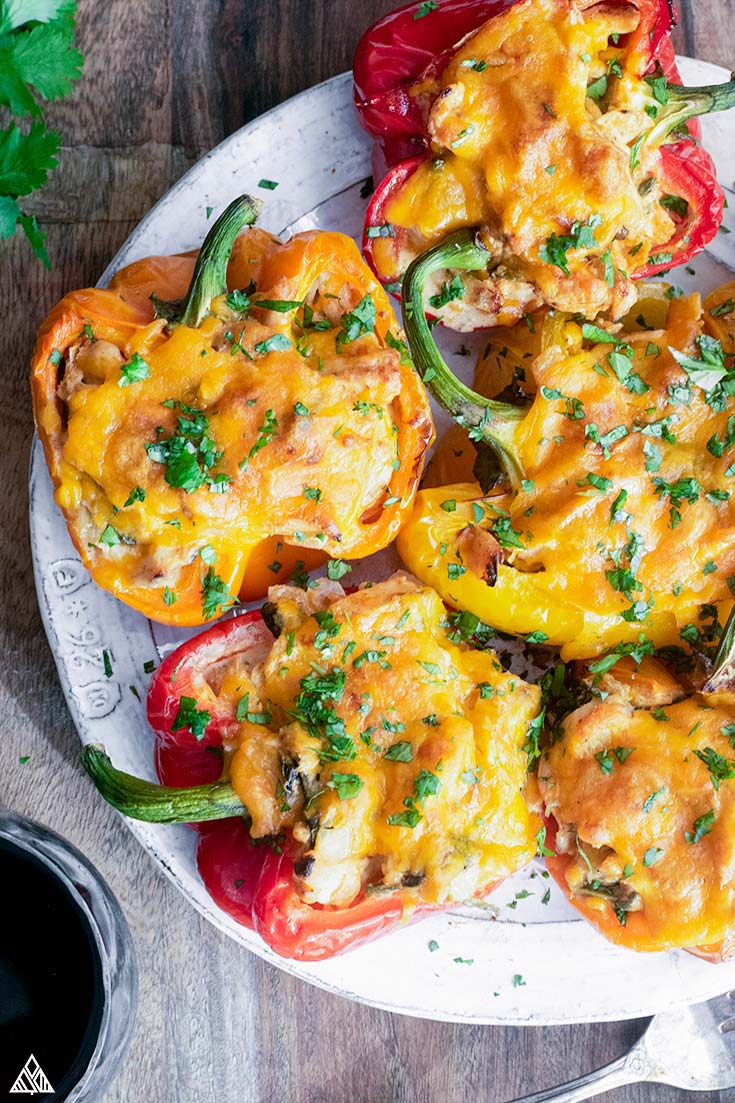 So good, I almost couldn’t write this article because I was too busy enjoying every last nibble. So good, we didn’t have leftovers. So good, I’m making it tomorrow for dinner, again. So good, my picky-eating-friends cleared their plates.

If you’re ready to make chicken stuffed peppers that’re really that delicious, then let’s get roasting!

I adapted this recipe from my Mom’s stuffed pepper recipe, and left out the high carb foods like corn and beans. Trust me friends, you certainly wont miss those ingredients in these chicken stuffed peppers!

How to Make Chicken Stuffed Peppers

Ok, so now that we’ve establish how DELICIOUS these stuffed peppers are, let’s talk about how to make them.

If I were to rate the amount of effort these chicken stuffed peppers require to make, I’d give ‘em a 4 out of 10: they’re SUUUPER easy to throw together, but still require a bit of time (cooking the chicken, sauteing the veggies, etc.). But don’t worry, it’s worth it!

Here’s all you need to know about making these Mexican chicken stuffed peppers: 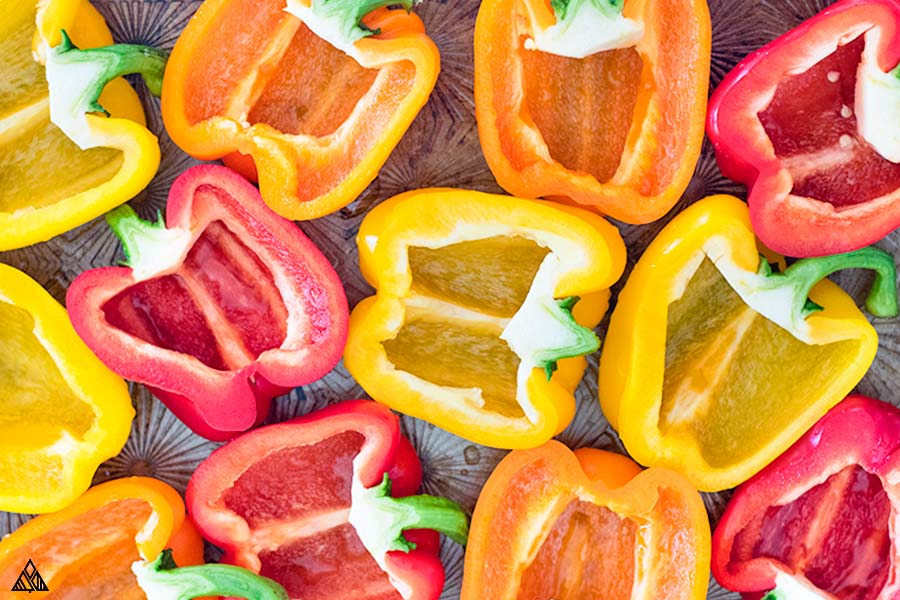 To do this, cut the keto vegetables in half and de-seed them. Then, lay them flat on a baking sheet and spray both sides with cooking oil. Bake in the oven for 25 minutes, or until they’ve softened and begin to slightly brown.

To kill two birds with one stone, let’s bake out chicken at the same time! This can easily be done by baking the chicken on a rimmed baking sheet alongside the peppers. Sprinkle each chicken breast with oil, salt and pepper first, of course.

Alternatively, you can save some time by purchasing precooked chicken and shredding it before adding it into the chicken stuffed peppers.

Luckily, the chicken and bell peppers will take the same amount of time to cook! While those are in the oven, we can do the rest of the work for our chicken stuffed peppers… 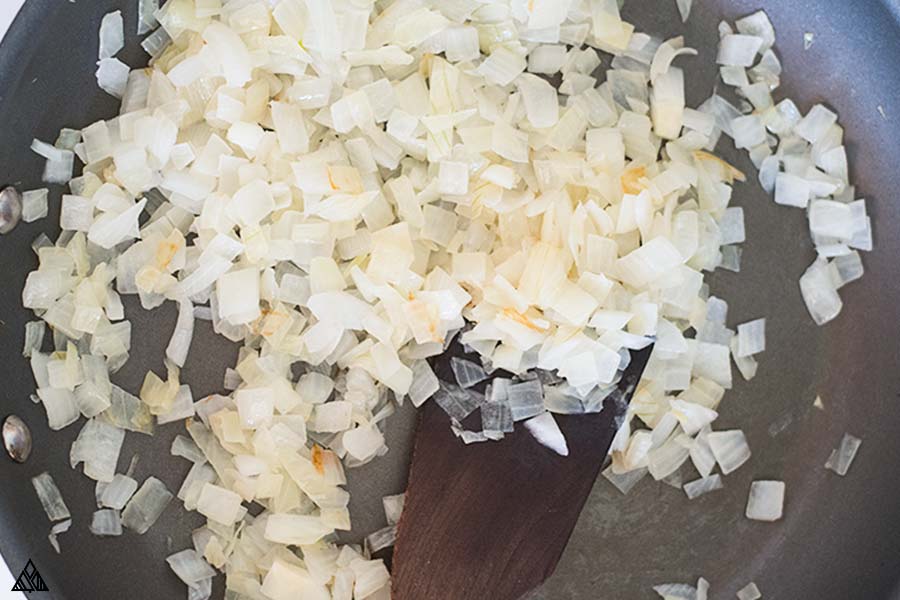 Meanwhile, let’s sauté the low carb vegetables — starting with the diced onion (this takes the longest to cook). Cook until it’s translucent and caramelized, about 10 to 12 minutes. 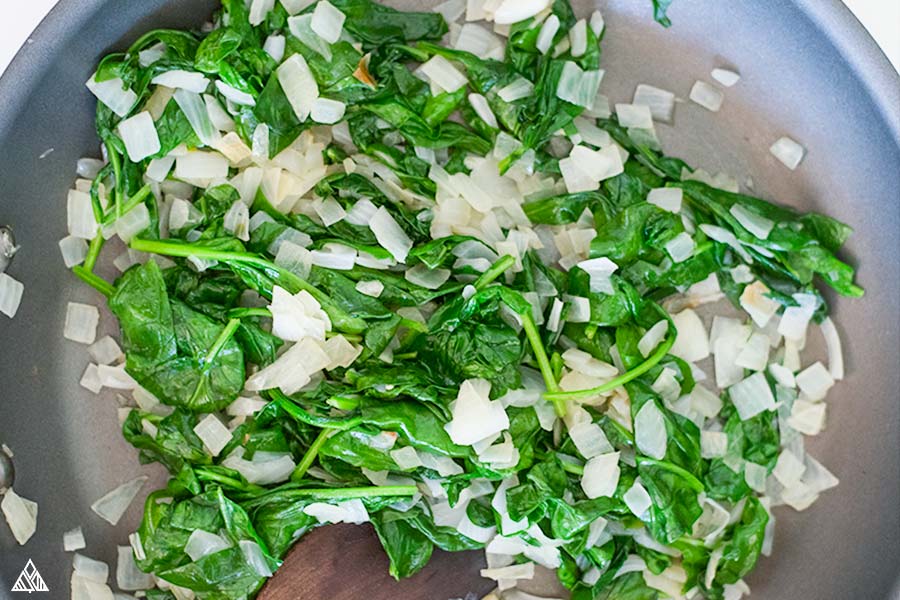 Then add the spinach and garlic — we want to cook as much of the liquid out of the spinach as possible, no one wants soggy chicken stuffed peppers! 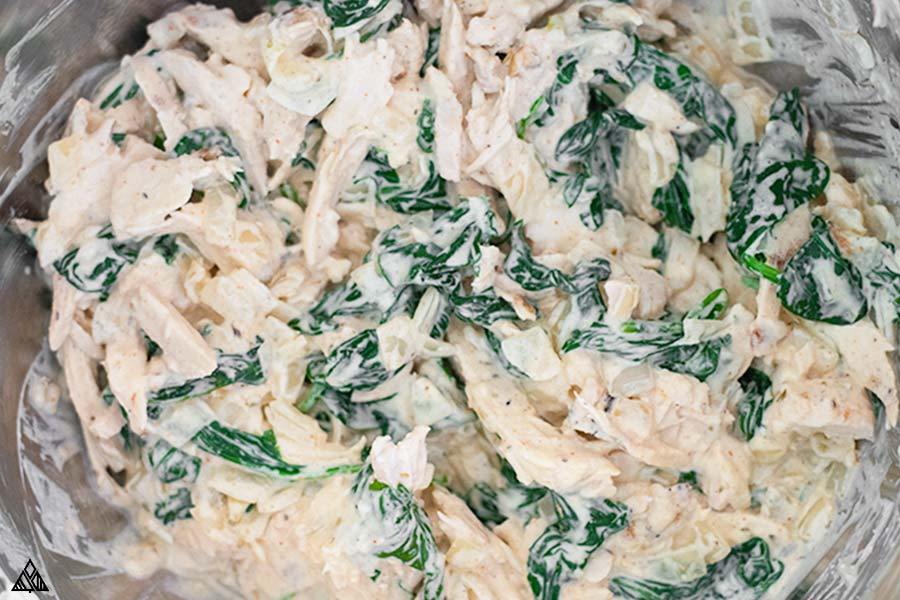 Mix it all up.

Now for the home stretch: Mix the ingredients for the sauce in a small bowl (this will help to ensure the spices dissolve into the liquid and blend evenly throughout our chicken stuffed peppers). Then pour the sauce over the filling and mix it all together. 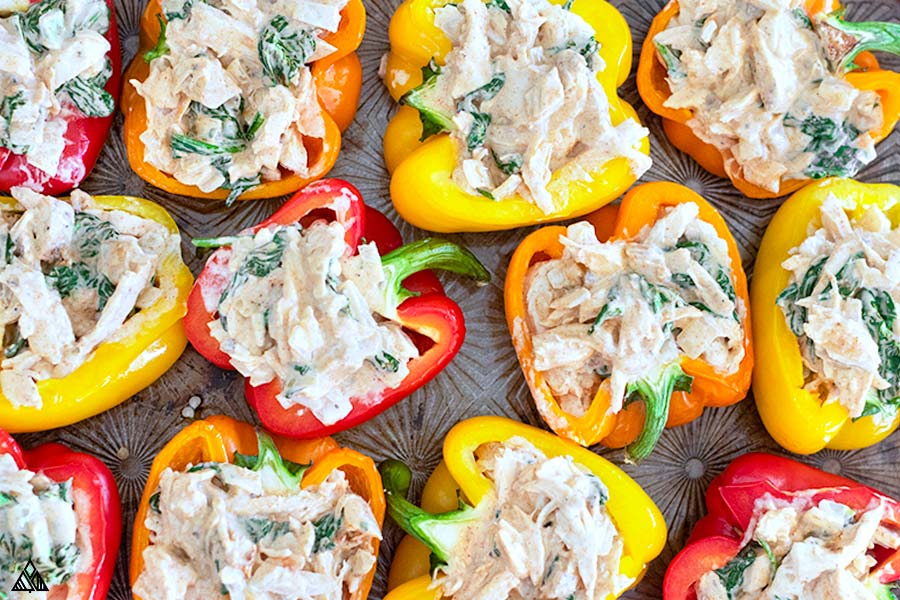 Spoon the filling into each of the baked peppers. Then top them with shredded cheese and bake in the oven until the cheese melts and everything is heated through — should be about 10 minutes.

These low carb stuffed peppers are ridiculously delicious on their own, in all their cheesy glory. It’s one of those complete low carb meals — veggies, protein, and a tasty sauce.

Here are some low carb side dishes to serve alongside your chicken stuffed peppers:

Psst – These chicken stuffed peppers have a whole lotta flavor! So, to keep this recipe the star of your low carb dinners, I keep the keto side dishes simple. 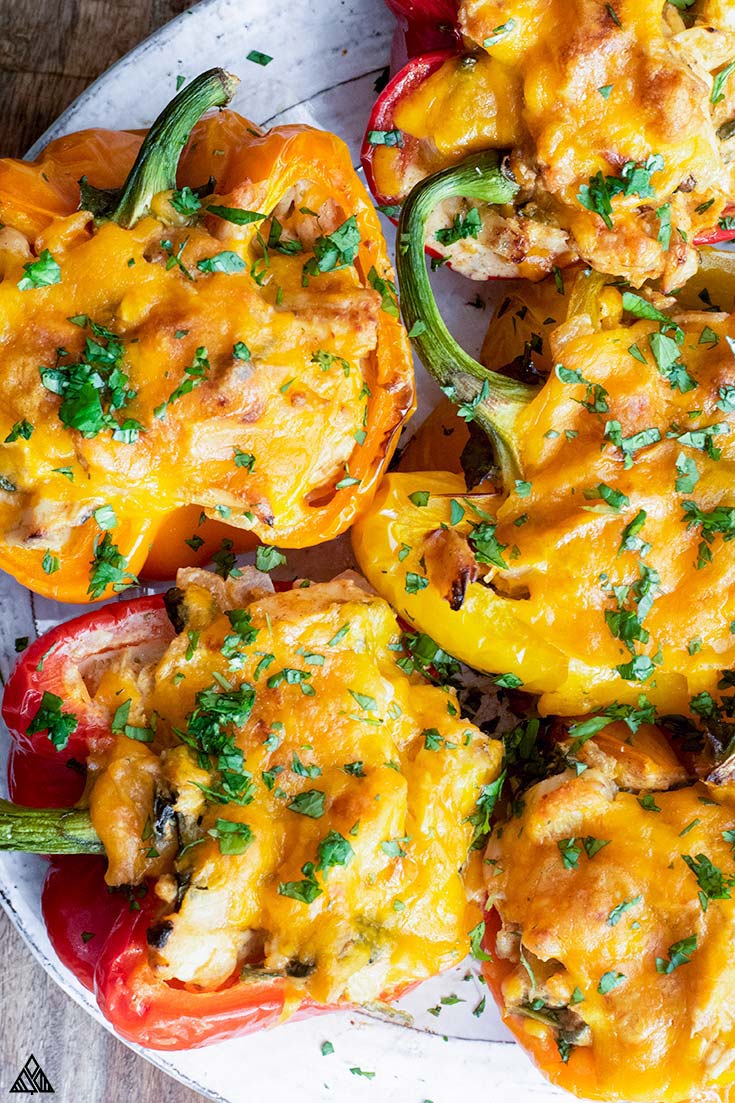 You guys know I’m all about my low carb meal prep! I find it’s the easiest way to stay on track during busy (or lazy) workweeks. And these keto stuffed peppers are the perfect recipe for the job — they make for great low carb lunch ideas and dinners.

When meal prepping these chicken stuffed peppers, I assemble the entire recipe, but only melt the cheese on the peppers we’ll eat at that meal. Throughout the week, whenever I’m craving this dish, I sprinkle it with cheese and pop it in the oven.

Portion peppers into your best meal prep containers — be sure to keep the toppings and chicken stuffed peppers separate, so the toppings don’t lose their crunch during the reheating process.

Psst — If you’re meal prepping this recipe, make a double batch! Same amount of work for twice the keto meals.

Can You Freeze Stuffed Peppers Without Rice?

Freezing your stuffed peppers without rice is a great way to meal prep for future meals — although of all the recipes I freeze, chicken stuffed peppers seem to have a lot of ice buildup. I suggest defrosting them in the oven on a rimmed baking sheet, and plan to drain a little water from them (sounds weird, but we didn’t find the flavor to be affected). 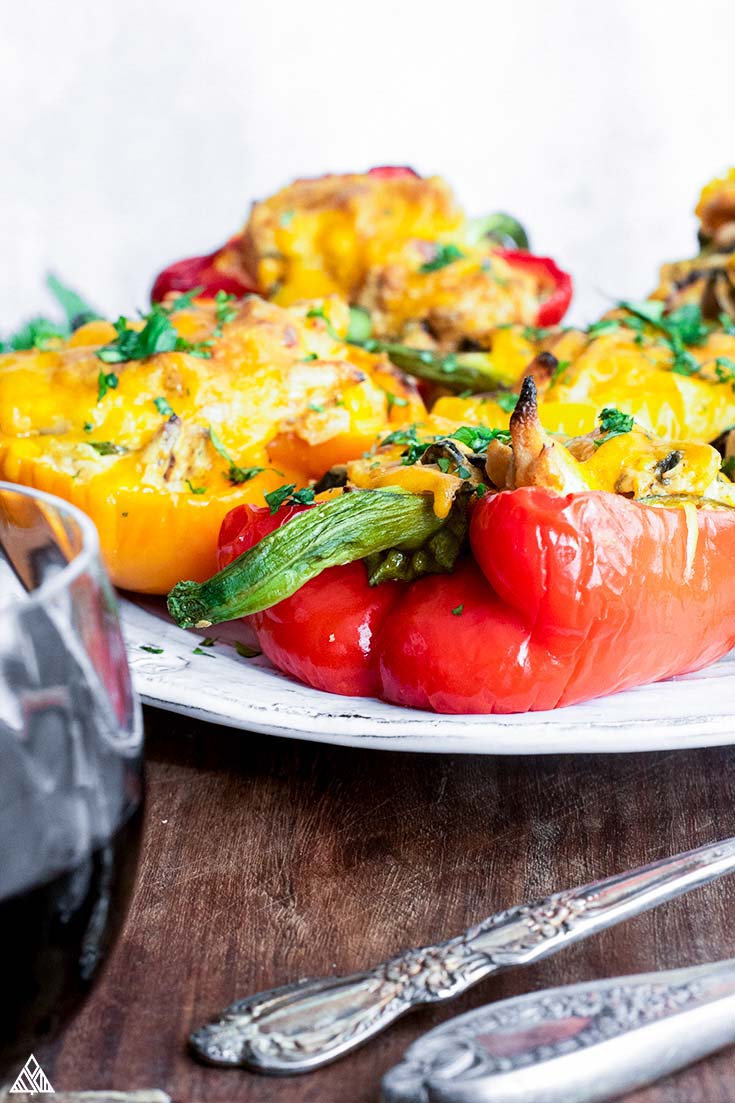 Let’s dooo thisss! Can’t wait to hear whatcha think of these chicken stuffed peppers! Let me know what toppings you enjoyed most in the comments below. 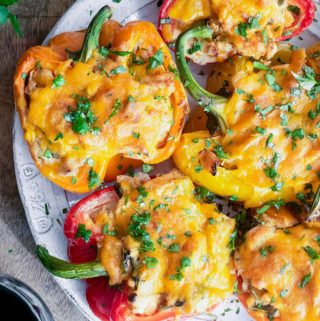 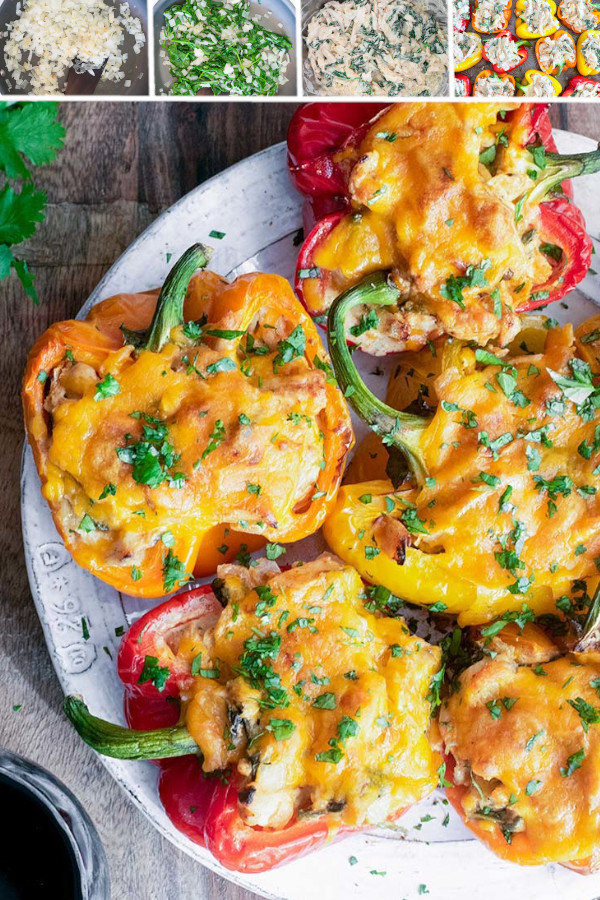 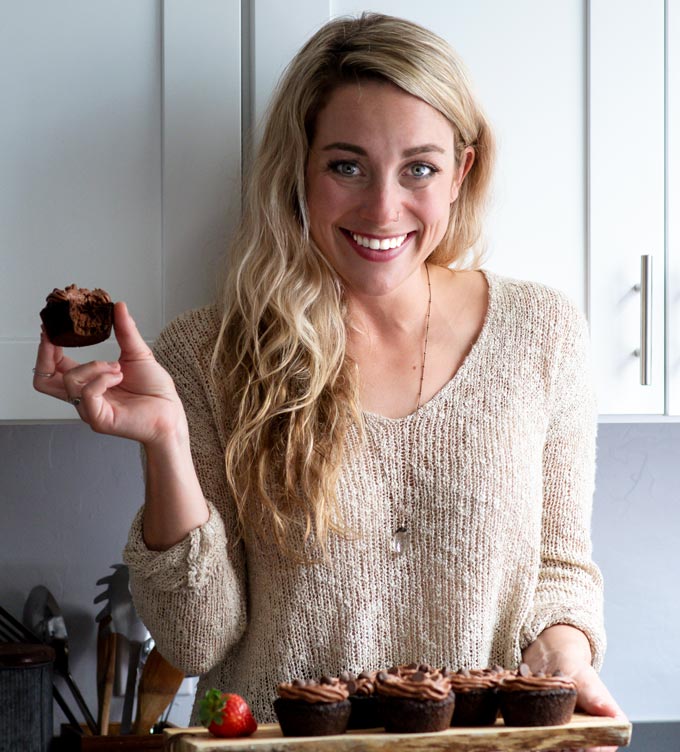 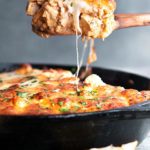 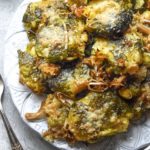 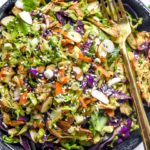 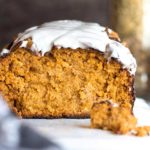 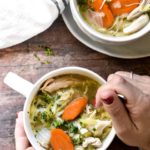